It’s just a matter of time before instant translation will be possible, with revolutionary results for the global community, argues Jonathan Luff on the technology sites of WIRED.

A couple of years ago, as the Arab uprisings were taking place across the Middle East, I helped to organise a Whitehall seminar at which we asked one big question:

What can Western countries do to build bridges with Arab societies in transition?

Some brilliant people took part. One particular comment, from a respected journalist, resonated so powerfully with me that I couldn’t get it out of my head for days afterwards. It was this:

As I mentioned, this fact stayed with me and wouldn’t go away. Eventually, I sat down to work out whether there was anything I could do to help address the challenge it presented. Was it possible, I wondered, to use technology, machine-learning, and crowd-sourcing to rebalance this incredibly one-sided equation?

To my surprise, some fantastic people shared my desire to address the challenge, and a pilot project was launched with their support to see whether the best works of English and Arabic, where they are free from copyright, could be translated from one language to the other and made available to readers wherever they are, at little or no cost.

If the pilot works (and it is still a big ‘if’), this will be a fabulous resource for Arabic and English speakers alike. Hopefully there will be more to say about this in due course. But it isn’t the main point of this blog.

Having thought about the issue a bit, and having witnessed some extraordinary advances in artificial intelligence, machine learning, wearable technology, and real-time data analysis, I have come to believe that the next big leap forward is not represented by Google Glass, cool as it is (and see this if you’re not convinced), but by “Google Ears”. Fans of Douglas Adams will think immediately of the Babel Fish, and they wouldn’t be far off. As computing power continues to increase in line with Moore’s Law, we are close to the point at which it will be possible to provide accurate, real-time translation of spoken language into any other mainstream language. 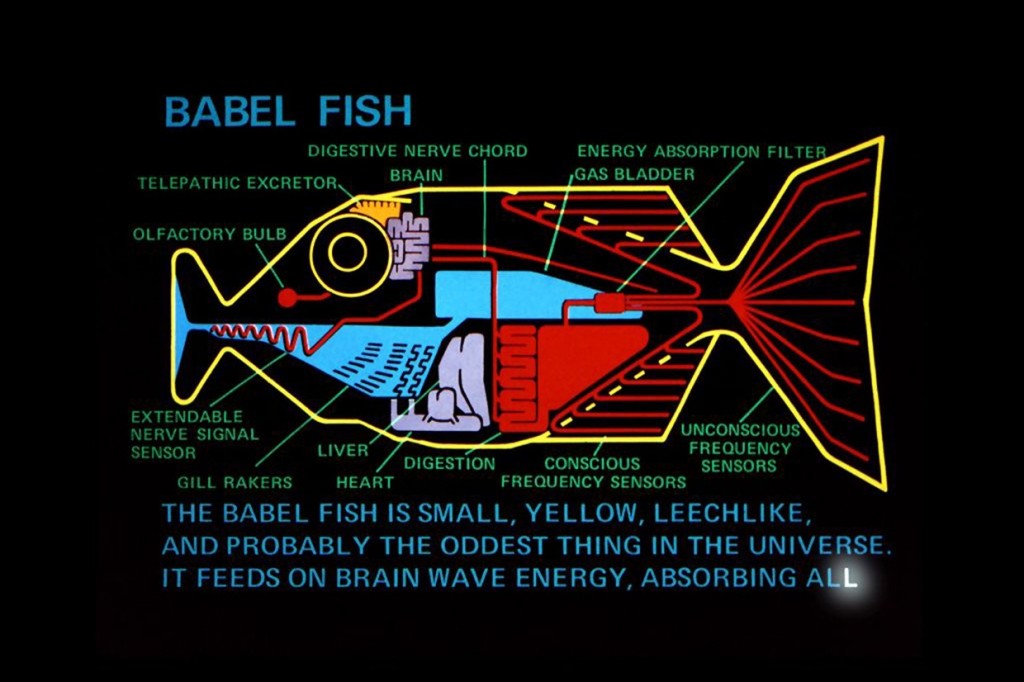 Just think what an impact this will have. You will be able speak to, understand, learn from,  and do business with anyone, in any place, at any time. One world, not necessarily in harmony, but in contact and able to communicate effectively, through a tiny device sitting in your ear or implanted in your jaw, taking in sound and converting it into whichever language suits you best.

Discussing a new Samsung phone on the Today programme on 1 April, the participants found themselves focusing, again, on the ways we can and will interact with a touchscreen (or non-touchscreen, in Samsung’s case). Interesting, yes. Watershed? No. I’m sure that the team at British firm Swiftkey, whose technology already predicts the things we want to write on phones like Samsung’s, are not just working on better ways to type. There is some evidence of progress already: Siri, Apple’s personal assistant which listens to, transcribes, and acts upon speech, and Google Translate, which rapidly translates to a reasonable standard between certain languages, are cases in point. But these are small steps along the path to the Babel Fish.

I’m certain that this vision of instant global translation will not please everyone. What about nuance, tone, idiom, poetry, rhythm, cadence etc.? What about meanings that are unique  to a language in its original form (this is a particular issue for Arabic, with attempts to  translate the Qu’ran, for example)? What about the value gained by making the effort to learn another’s language and with it their culture? All good points, not all of which I can  answer. But the fact is that this capability is coming, much sooner than you might think, and it is going to change the way we think about the world in the same way that the airplane, the telegraph, the telephone and the television did so in the 20th century.

The Babel Fish is coming. And like me, I’ve no doubt that Douglas Adams would be excited.