Localization services have assumed great importance at the present time owing to the global expansion of the businesses. Connecting and reaching today’s multilingual population cannot be done only by translating text. Localization in its most basic form cannot be seen anymore as adapting a particular product or service to a given area. Actually, localization is an umbrella term that includes a lot of different tasks. What happens when localization is forgotten?

It was probably inevitable that the Australian and Chinese performers of Cho Cho, a confronting adaptation of Madame Butterfly, would experience a clash of cultures before they took to the stage – John Garnaut.

Themes about colliding ideas of love, commitment and integrity have been deliberately amplified in a production that has been negotiated, dissected and performed simultaneously in English and Chinese.

But they didn’t expect to be lost in translation quite so quickly – from the moment the Chinese actors saw their costume and make-up designs. The actors refused to wear the gaudy, exaggerated interpretations of 1930s Shanghai. 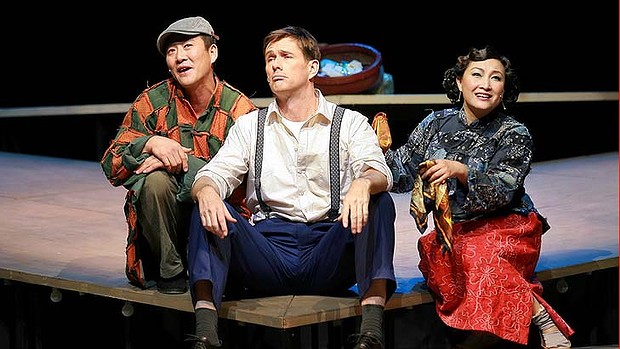 Members of the cast including Scott Irwin as Pinkerton, centre, and Wang Zheng as Cho Cho. Photo: Sanghee Liu

The actor Du He says she was surprised to find herself in a fur coat, which was meant to signify extravagant luxury, but which she thought made her look like a Mongolian herdsman.

There were tears and protests on both sides. ”It is unusual working in a culture that’s 5000 years old where everything is done by tradition and there’s not a lot of interpretation,” says the designer Richard Jeziorny. ”The costumes were not outlandish. We don’t have Churchill in a pink tutu. Things that you’d do in Australia, you can’t.”

The producer Wang Ziyin stepped in to avert an actors’ strike. ”The Chinese actors said: ‘That’s what you think Chinese look like: you think we’re all comical and you’re normal’,” she says. ”I had to force a change. I really was a bully.”

After explanations and negotiations, the costumes were adjusted but not discarded. Actors and creators earned one another’s respect. The four-day season opened on Thursday night and by Friday the glitches had been ironed out and audiences were proclaiming it a great success.

The Puccini opera and the novel on which it is based, where the worlds of a US sailor and a geisha tragically collide, carries an extra edge in China now, given the maritime and military tensions among the three nations.

This collaboration between the National Theatre of China, the Arts Centre Melbourne and Playking Production is set in pre-war China. Cho Cho and her child are performed in part by puppets designed by the director Peter Wilson.

Daniel Keene, the acclaimed playwright, adds a brutal twist that transforms the submissive Asian victim into a powerful and disturbing heroine. Cho Cho smothers her child before taking her life. Keene was intrigued that what he had conceived as an act of furious, tragic revenge was viewed with more complexity and ambiguity by some of the Chinese actors.

”The Chinese saw a vision of hope because of the whole idea of reincarnation,” he says.

”In a way, her love and love for her child is preserved because she’s taken away everything. It’s incredible. I find it intriguing.”

The production process, as much as the show itself, is designed to highlight and investigate the cultural collisions that occur as Australia and China grow more intertwined.

The politics of performing in a Communist Party-controlled system were perhaps aided by a heavy-handed portrayal of Pinkerton, the arrogant American, which compromised the theme of cultural understanding.

But, as ever, the politics were difficult to negotiate. A stage manager was temporarily forced out of China because of a visa problem relating to her journalist husband. Producers had to hold their ground after bureaucrats waited until after Friday’s performance to demand the ending be cheerful, not tragic. It was fine to have a Japanese mother killing her child, as in Keene’s original script, but not a Chinese mother.

”Everything has been done in two languages, with two ways of thinking. That’s why it is so challenging and why it is so interesting,” says Wang, who says she finds herself thinking like a Chinese person in Australia and an Australian when in China.

”There are so many broken marriages, new businesses that immediately fail, countries that turn around and have war with each other … because they don’t understand each other’s language.”