Social networks are growing spheres. Every minute of the day thousands of photos are shared on Instagram, tens of thousands of tweets are exchanged on Twitter, hours of YouTube videos are uploaded and hundreds of thousands of pieces of content are posted to Facebook. Facebook counts in April 201, 1.11 billion users. 61 percent of LinkedIn members use it as their primary professional networking site. These statistics show an overrated abuse of social networks and hours lost every day doing nothing very constructive on them. 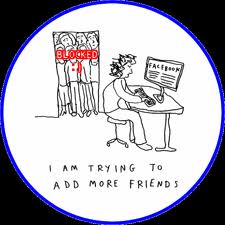 Social networks: where what was once private becomes public – Technology can be an amazing thing when it is used properly. Nonetheless, we all hate the narcissistic fools who tweet and Facebook constantly about their woes and nonexistent problems. No one really cares about these attention seeker’s lives but everyone continues reading their statuses. We’re all guilty of it.  No one wants to know what you had to eat this morning but it is only human to be curious and want to know what is going on behind the curtains. Social media takes away the personal feel of relationships. It creates a false sense of who people really are. On social networks people can be anyone they want to be and chances are you don’t know the real person behind that profile.

Trust worthy information? Social media can “help people make sense of their situation during a disaster, social media can also become a rumor mill and create social problems very fast. Users often get swept away in sharing news and don’t double-check if what they’re spreading is true. For instance, Internet users shared pictures of Hurricane Sandy that ended up being completely fake, from an image of a shark swimming in a New Jersey street to a picture of the Statue of Liberty surrounded by violent waves, which was actually taken from a scene in The Day After Tomorrow.

Places of propaganda – Social networks are used for many worthwhile causes whilst people also use them to give their political, religious opinions. Would you go out on the street screaming out loud your political tendencies? Well Mister or Missus anybody wouldn’t. However on social networks, once hidden behind a screen people don’t mind sharing anything and everything with anybody. It is just accepted and considered sociably acceptable today. People see their social network accounts as a private sphere. Who has never heard: All of my settings are confidential I don’t care about what is on Facebook I only share it with my friends. Your 900 friends from all over the world who you know all so very well …

We can only ask ourselves what would have happened if social media would have existed when people like Hitler or Stalin or even the Vikings were around. Would social media have made it worse and easier for these people to spread their propaganda or would people have been able to realize the absurdity of it. It is what Georg Simmel qualified of “web of group affiliations.” Social media is a very powerful tool accessible to anyone who wants it. The problem is one needs to know that: before diving in you should check the temperature of the water. You could be in for a chock!!

Remember the internet has a big memory; everything is saved and stored very carefully to be taken out again at any moment …

BE CAREFUL, BIG BROTHER IS ALWAYS WATCHING AND REMEMBERS EVERYTHING.