I realise that my previous post on Social Media was a bit negative. I would like to make that fact clear, social networking isn’t all bad. As social media groups hold billions of people in one place, it can be a powerful tool to spread big important news to the public very fast.

These communities which build up through social media increase the availability and interest to information – News and current events are becoming increasingly available via social media and this is encouraging young people to take an interest in what’s going on around them. Pages that constitute communities grow bigger every day, which create debates and helps people develop an opinion on many diverse subjects they probably wouldn’t have even known about. As long as one checks the sources, social networks are a big source of information.

Quick effective communication – The role of social media through the uprisings that arose independently and spread across the Arab world in 2011 is a very good example of its positive aspects.

Facebook and Twitter, during the Arab Spring helped coordinate events, gathering hundreds of thousands of people very quickly. Social networks are free spaces where everyone can communicate even in countries under constant repression where freedom of expression and opinion has no place; Through these networks, people were able to see that they shared the same opinions and weren’t alone in their struggle.

The protesters quickly adopted social networks because they are a way to get and share information without being censored, a way to stay informed about what is happening unlike television, which was, in those countries, controlled by the government and which showed no images of mobilization or repression.

That is why during demonstrations; protesters waved panels to the effigy of these social networks such as this photo taken in Egypt by another protester. 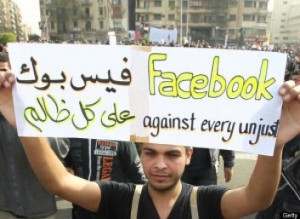 Therefore even if we all hate the narcissistic fools who tweet and Facebook constantly about their woes and nonexistent problems, social media has become an important part of society and helps democracy and freedom of expression develop across the world.