Relations to time, humour, time, food, manners and much more vary according to different cultures.

Here are some a few examples of those varitations: 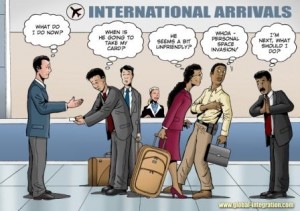 Many cultures have certain etiquette when communicating. My advice would be to always do some research and ask people about cultural differences when communicating and doing business. Remember that often things on the surface aren’t the most important. It is hard to know how to react, the wrongs and rights. We need to dig down deep into the culture for the communication to be successful. Nevertheless we need to get the simple things right first. Remember at all times to respect differences.