Cangjie(仓颉) was an official historian of the Yellow Emperor and the inventor of Chinese characters. According to legend he had four eyes and eight pupils. It was said that on the day the characters were born, Chinese heard the devil mourning and saw crops falling like rain, as it marked a second beginning of the world. 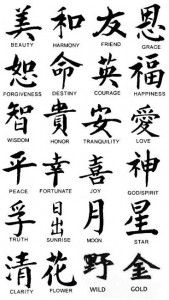 Shortly after unifying China, the Yellow Emperor, being terribly dissatisfied with his “rope knot tying” method of recording information, charges Cangjie with the task of creating characters for writing. Cangjie then settles down on the bank of a river, and devotes himself to the completion of the task at hand. After devoting much time and effort, however, he’s unable to create even one character. One day, Cangjie suddenly sees a phoenix flying in the sky above, carrying an object in its beak. The object falls to the ground directly in front of Cangjie, and he discovers it to be an impression of a hoof-print. Not being able to recognize which animal the print belonged to, he asked for the help of a local hunter passing by on the road. The hunter told him that this was, without a doubt, the hoof-print of a PiXiu, being different from the hoof-print of any other beast alive. His conversation with the hunter greatly inspired Cangjie, leading him to believe that if he could capture in a drawing the special characteristics that set apart each and every thing on the earth, this would truly be the perfect kind of character for writing. From that day forward, Cangjie paid close attention to the characteristics of all things, including the sun, moon, stars, clouds, lakes, oceans, as well as all manner of bird and beast. He began to create characters according to the special characteristics he found, and before long, had compiled a long list of characters for writing. To the delight of the Yellow Emperor, Cangjie presented him with the complete set of characters. The emperor then called the premiers of each of the nine provinces together in order for Cangjie to teach them this new writing system. Monuments and temples were erected in Cangjie’s honor on the bank of the river where he created these characters.