(Reuters) – There has been a big rise in the number of foreigners learning Chinese, but still too few are studying the language, officials said on Thursday, worried this may affect efforts to soften China’s global image.

China began setting up Confucius Institutes in 2004 to teach Chinese and they are now in 81 countries, but efforts to expand them are being hampered by too few teachers and poor teaching materials.

“At present, the basis for the studying or teaching of Chinese is very weak, unlike for English, French or Spanish, which have been popularized for hundreds of years,” said Xu Lin, director of the Confucius Institute Headquarters.

Xu, speaking to reporters on the sidelines of China’s annual meeting of parliament, said that in the United States more students studied Latin at middle school than Chinese.

“Though the desire to learn Chinese is very high, there is a lack of teachers and teaching materials,” she added, referring specifically to the Confucius Institute.

“Our teachers and teaching materials are not really appropriate for what’s demanded of them overseas.”

Still, the number of foreigners learning Chinese around the world now stood at about 40 million, Xu said.

China originally planned to have more than 100 Confucius Institutes worldwide by 2008, but by the end of last year already had more than 250, such is the demand.

Ironically, China’s ruling Communist Party once condemned the ancient philosopher Confucius after whom the institute is named, and tried to eradicate the principles he taught, such as loyalty to family and tradition, saying they were “reactionary.”

But the government has begun reviving some old practices, including promoting certain aspects of Confucianism, as the Party seeks to make traditional virtues an anchor of order and stability during times of social change.

Zhu Chongshi, president of Xiamen University in southeastern China, said promoting Chinese language and culture globally would be good for the country’s image.

“What is soft power? The best soft power is to let people know you, understand you, love you.” he said. “Less than one percent of U.S. students study Chinese. With a situation like that, it’s impossible for China to raise its soft power.”

“Setting up Confucius Institutes can have a huge effect on promoting understanding between China and the world. It will help the people of the world objectively, fully and properly know China’s people and culture”, he said.

“This is the best path to show China’s soft power”. 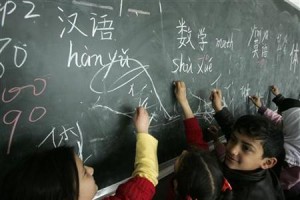