Most of us know the term of ‘Going Dutch’, meaning that two or more people are splitting the bill in public spaces. In my opinion, this type of saying: Going Dutch doesn’t sound very nice about us ( the Dutch people) and so are tons of other expressions including the word “Dutch”, but how Dutch is this Going Dutch actually?

First of all let’s look at the history of this saying; research indicates that it originated during the English-Dutch war around the 17th/18th century. The use of the word Dutch, was only mentioned in negative situations since both countries were at war. Other sayings including the word “Dutch” are: a Dutch Feast (when the host is getting drunk before his/her guests), and a Dutch treat (the part of the bill when it is split). 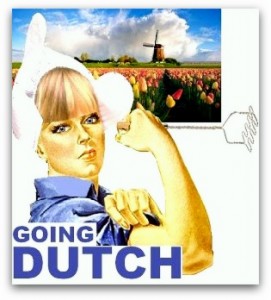 But what about going Dutch?: splitting the bill. Please don’t think we do that all the time, we might do that in some cases. Generally this is mostly done amongst students and mainly amongst friends. There are some cases in which you should or shouldn’t go Dutch in the Netherlands: Here they are:

When going to a pub, bar or club, the bill is usually not split immediately but people take turns. Going out with 5 will mean I’ll order 5 beers, that’s what my friends will do so in the end we might have consumed 5 beers but didn’t have to go to the bar separately every turn. Sometimes one pays more than the others, but this is not taken too seriously. Another possibility is to create a “pot”: all people put in e.g. €10 before the first round of beers is bought.

I have to admit: we’re gonna go Dutch: when the bill arrives at the table, it is looked at and everybody pays their part. Or sometimes one pays and the other returns the money when possible.

To answer the question: Are the Dutch Going Dutch? I can say it’s not as Dutch as most people think: a lot of other European countries have the same habits about going Dutch.  Think of Germany, France, Belgium. But hey, what does it matter: if everybody is fine with it and the situation fits going Dutch: WHY NOT?